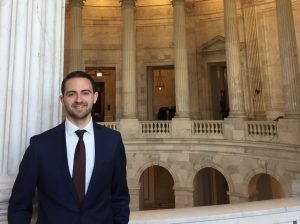 Major: Economics with a math emphasis

Where was your internship?

I interned at the Committee on Ways and Means – Tax Subcommittee.

What types of projects did you take on during your Wisconsin in Washington experience?

I had a lot of different projects – ranging from your typical intern administrative work to policy research. During my time on the committee, Congress was in the middle of overhauling the tax code, so there were a wide variety of demands for the interns. Every week I had to update the legislation tracker which helped us keep track of member priorities. I was also in charge of collecting stakeholder feedback from members of Congress and outside industries about certain tax provisions. The stakeholder feedback allowed me to gain a more holistic view of the tax code because many individuals had personal interest in the changes that were being made. This allowed me to see the incredibly complex decisions required to get the bill done.

The policy research I did was for the tax counsels on the committee. They were in charge of crafting tax policies, and sometimes they would need background on certain policies.

Finally, I was able to do a lot of personal interest work. For example, my supervisor would send me to hearings and briefings I was interested in. I would then write a memo about what was said that would be circulated around the office. I also did work for our chief economist since I have an interest in becoming an economist myself one day.

I am currently a staff assistant. It is the entry level role for most offices on the Hill. Currently, I am the tour coordinator in the office – which is both scheduling and giving tours. I also answer phones, check people in for meetings, help manage the interns, and do any miscellaneous work that might pop up in the office.

Any advice for turning an internship into a capitol hill job?

Network, network, network. You could be a Harvard graduate with a 4.0 who was the president of a variety of clubs – but if people don’t know you are looking for a job, you won’t get one. Ask anyone and everyone for coffee – even if you may not be interested in their field because they might know someone they can connect you with.

Never be afraid to state what it is you’re interested in or that you are looking for a job. Almost everyone was in your shoes at one point and are more than happy to help you out. This took a while for me to get used to, since I have the typical “Midwest nice” personality, but it paid dividends in my job search.

Have you connected with any fellow Badgers since you’ve been there?

Yes, many. In fact, one of the people who helped me in the process of finding a job is UW’s own Mike Lenn who is the director of UW-Madison’s Federal Relations. The communications director in Senator Johnson’s office is also a proud UW alum. Most of my connections, however, came from the Wisconsin in Washington program. Our program director – Bola – brought in speakers that were able to help me out in my job search. The UW receptions that were put on also helped me to connect with people who were alumni from the school who were eager to help fellow Badgers out.

Do you have any advice for future interns on how to make the most of their experience in DC?

Do absolutely everything you can during your time here. I don’t think that I have ever been busier in my life than when I was in the program. I worked 36 hours a week, but I also went to every reception I was invited to. It is essential when you are trying to make your way in a city like this that as many people as possible know you and your name.

However, if I wasn’t at work, going to receptions, or networking, I was most likely doing something in the city with my friends in the program. During my time in the program, I lived a few blocks from Capitol Hill, and it gave me access to everything in the city. While I loved my time interning, living so close to all of the action allowed me time to think about whether this was a place I actually wanted to live in.

So, go out and explore. Go to museums, walk the mall, enjoy a baseball game, go sit at the reflecting pool, and go enjoy happy hours. It’s these moments that you will remember for the rest of your life.