With the results of Tuesday’s election still being determined, Congressional majorities in both the House and Senate are in the balance. The final outcome may take days, if not weeks, to be known. Control of the Senate may be determined by a run-off in Georgia on December 6.

Regardless of which parties ultimately end up controlling the House and Senate, the next two years will likely feature a narrowly divided Congress.

Lawmakers return to Washington next week to kick off what is shaping up to be a very busy lame duck session. Finalizing the fiscal year (FY) 2023 appropriations bills and passing the National Defense Authorization Act are at the top of the agenda. Once Congress wraps up the 117th Congress, the new 118th Congress will hit the ground running in early January. In the meantime, both Republicans and Democrats will conduct leadership elections and decide on Committee membership. 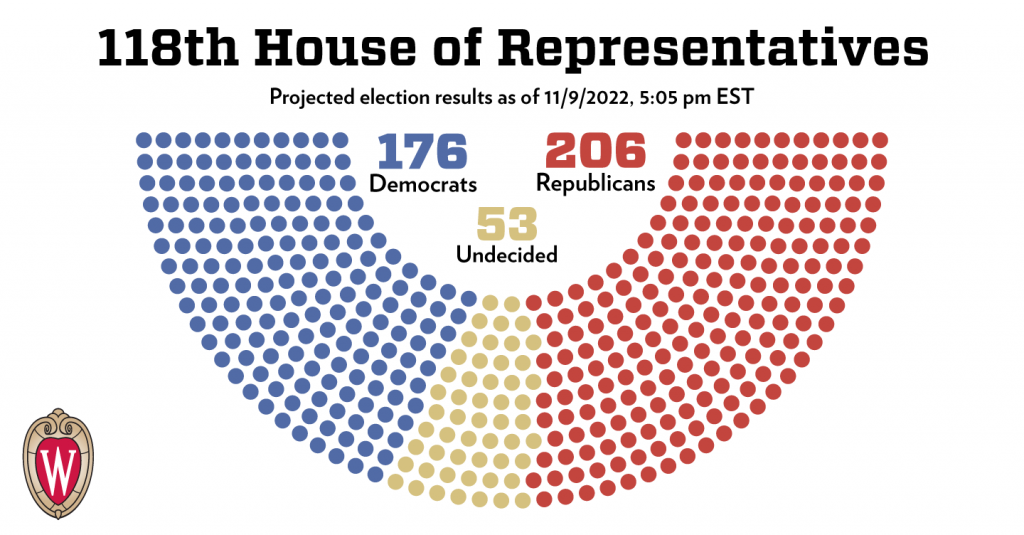 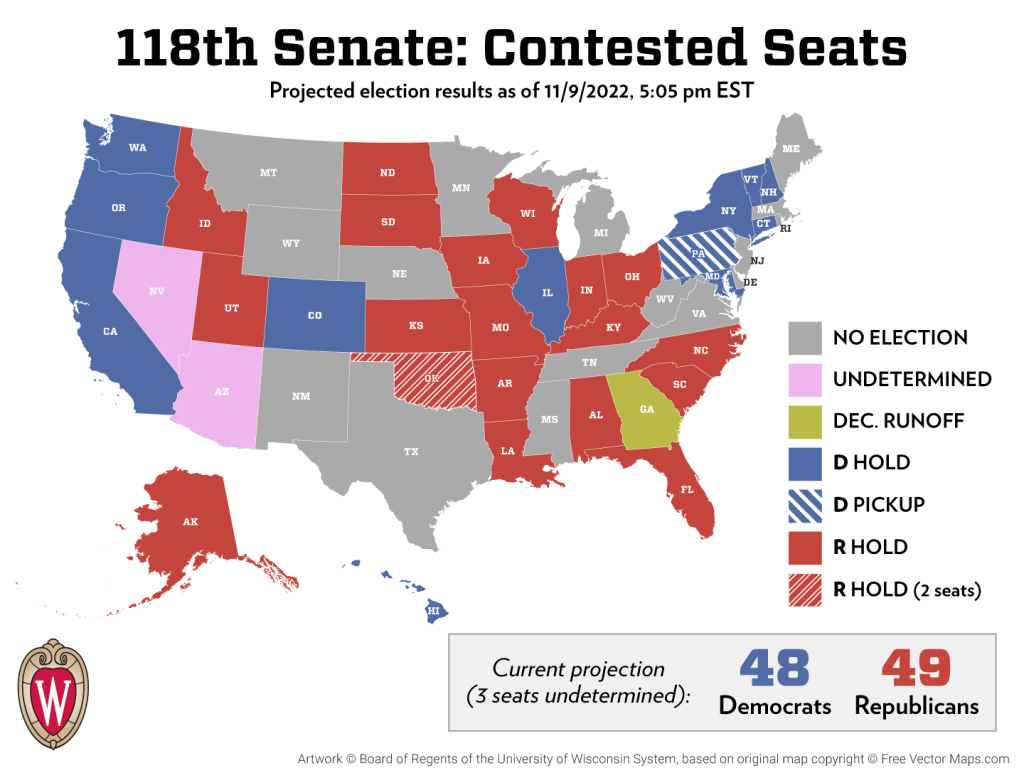 Sen. Johnson is likely to continue serving as the top Republican on the Senate’s Permanent Subcommittee on Investigations. Should the Senate flip, Sen. Johnson will likely conduct hearings where he may examine the origins of the COVID-19 pandemic, Hunter Biden’s overseas business dealings, and security lapses at the Capitol on January 6, to name a few.

We expect Sen. Johnson to renew his calls to rein in the federal budget and join other deficit hawks in calling for spending cuts. He will also look to cut government regulations and reduce the size of the federal government’s workforce.

Derrick Van Orden served in the Navy for 26 years, and his service included combat tours in Iraq and Afghanistan, in addition to other deployments around the world. After retiring from the Navy, he consulted for the private sector, and he opened the Butternut Café with his wife, Sara.

Congressman-elect Van Orden’s win flips the seat from Democrats to the Republicans. Six of Wisconsin’s eight congressional seats are now in GOP control.

Janesville Congressman Bryan Steil is in position to lead the House panel charged with the oversight of federal elections and the day-to-day operations of the House of Representatives. The Committee is also responsible for overseeing security on the House side of the Capitol. Greater public access to House buildings is expected next year pending adequate Capitol Police force staffing. Rep. Barry Loudermilk (R-Ga.) is Rep. Steil’s main competition for the gavel.

Lame duck sessions are not well-known for their productivity, but this year could be different as House and Senate Democrats try to pass as much legislation as possible should Republicans take control of the House in January. It is virtually guaranteed that Congress will pass the annual National Defense Authorization Act and a FY 2023 omnibus appropriations bill, but some Republicans will urge their leadership to wait until the new year if it turns out they have more power. The retirements of Senate Appropriations Committee Chairman Patrick Leahy (D-Vt.) and Ranking Republican Richard Shelby (R-Ala.) are likely to garner enough goodwill to complete action on the spending bills by the end of the year. Omnibus spending bills always contain riders, and items that may hitch a ride include supplemental disaster funding in the wake of Hurricane Ian and an energy permitting proposal that Senate Majority Leader Chuck Schumer (D-N.Y.) promised Senator Joe Manchin (D-W.Va.) in exchange for his support of the Inflation Reduction Act in August.

It’s possible, but unlikely, Congress will raise the nation’s borrowing limit during the lame duck. This would be an especially contentious issue next year were Republicans to gain control of the House with President Biden in the White House. It’s unclear when the limit will need to be raised—it could be as early as the summer depending on the year-end spending bill combined with the president’s student loan forgiveness plan, or it could be later in the year.

If Republicans were to take control of the House, there would be limited opportunities to find common ground on fundamental policy issues. It would be a struggle to accomplish the bare minimum “must do’s,” let alone pass legislation like a Higher Education Act reauthorization bill. It is unlikely Congress would be able to pass a budget resolution in the spring given the narrow margins in both chambers, so budget reconciliation would not be a tool the Senate can use to pass legislation with a simple majority. Therefore, legislation would have to pass the Senate with a 60-vote majority.

While there is an effort by some Members to address the debt limit in the lame duck session, as of this writing that seems unlikely. In that case, raising or suspending the debt limit and funding the government (for FY 2024 and FY 2025) will be the biggest challenges for the new Congress. However, the Budget Control Act of 2011 and the Bipartisan Budget Act of 2013 provide instructive examples of how a Republican House and a Democratic president might eventually work together to address the debt ceiling, enact fiscal reforms, and pass a multi-year spending deal. Major entitlement reforms are unlikely to occur in the next Congress, but a return to modest fiscal restraint—perhaps through new caps on discretionary spending that could affect federal research agencies—and budget process reforms may be possible.

As noted above, reauthorization of the Higher Education Act is unlikely in the upcoming Congress, but education issues will remain a focus of some committees. Republicans on the House Education & Labor Committee are sure to examine President Biden’s loan forgiveness plan as well as Education Department regulation proposals that they find controversial, such as those related to Title IX and transgender students.

The U.S. relationship with China will also remain in the spotlight. Republicans have announced that a bipartisan select committee on China will be established to formally look at their economic and human rights record and provide policy recommendations. Green Bay Rep. Mike Gallagher recently said there is “huge opportunity in divided government” to get “bipartisan work” done on China. Other Republican lawmakers have raised concerns with Chinese students studying at American universities and the Chinese Communist Party’s “influence” in American universities, including endowments.

Learn more about the work of the Office of Federal Relations by subscribing to our updates, visiting our website or following us on Twitter.